The Republic of Ingushetia was formed on June 4, 1992. As a subject of the Russian Federation, it constitutes a part of the Southern Federal District, with its area of 3, 600 sq. km, and with the population of 442, 2 thousand people (according to the Federal State Statistics Service for 2013). The Republic of Ingushetia borders on the Chechen Republic, Georgia and North Ossetia. The main religion is Islam, more than 80% of the population being Muslims. The capital of Ingushetia is the city of Magas with the population of 500 citizens. The distance between Magas and Moscow is 1,486 km. It shares the same time zone with Moscow.

Tours to The Republic of Ingushetia Magas. Tower of Concord is a symbol of spirit and unity of Ingush people and all Russia. Today it is the highest building in the Republic -100 meters high. However, in order to climb up the stairs encircling the tower internally, you will have to cover the distance over 1 km upwards! And though there’s no elevator in the tower, at the altitude of 700 meters a reqard awaits tourists for their hard ascending; it’s a beautiful view of the city and the mountains from the observation deck. 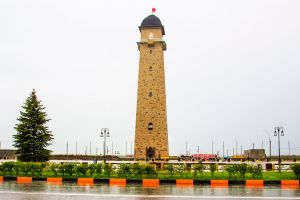 The Memorial complex to victims of purges is formed by a group of nine watch-towers located close to each other and barbwire-braid. Each of them was built according to the standards adopted in this or that century. No doubt, this is one of those monuments, the contemplation of which leaves an indelible mark in one’s heart. The Memorial was erected in memory of the eviction of the Ingush to the North Kazakhstan and Kyrgyzstan in 1944.

In 1957, the Ingush returned to their historical homeland. The Prigorodny district remained as a part of North Ossetia. In 1991, the Russian Federation adopted the "Law on the Rehabilitation of Victims of Repressions", which provided for the restoration of the borders that existed before the exile. The settlement of the issue with Ossetia ended in a tragedy - an armed conflict. 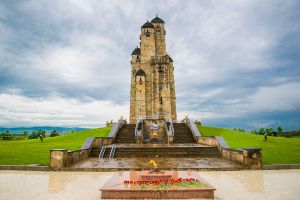 Mountain Ingushetia. Why are the Ingush people so attached to their tower culture? And why do they treat the monuments of eld with such pride and respect so uncommon in the modern society? Traditionally, the Ingush, who call themselves Galgai- "the people of the towers", lived in the mountains, built, and died in clashes. Towers for the Ingush mean not just historical heritage, it is a kind of umbilical cord that connects each Ingush with their native land. It turns out that every family in Ingushetia has a personal, family memory of the past. Ancestors for the Ingush are not abstract shadows of centuries, but named people who gave their surnames to every living Ingush. For more details please see the page http://openkavkaz.com/map

Tkhaba-Yerdy Temple is one of the oldest Christian monuments in Russia, built in 820 according to the lost inscription on the facade. Its architecture is unique being a compromise between the Ingush and Georgian cultures. Every year thousands of people come here who want to see the oldest temple of religion.

Erzi Conservancy Area. Perhaps the most important feeling that can be experienced in this preserve is the perception of the unity of man and the mountains nature- the ancient sanctuary Myagi-Erdy, as if grown naturally from stone; a sacred spring on the Bistht Pass, with the water rich in ions of silver and considered curative; waterfalls, fiercely erupting from the ridge down on the rocks; endless green ridges; and old, old as could be hard-rocks forming mountains ... All this merges into an aggregate picture saluting every time you close your eyes, and drawing this perfect beauty in your memory for a very long time. 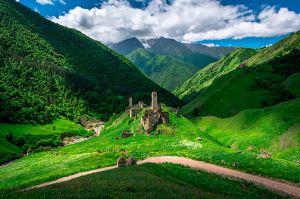 In 2008, the Vovnushki Fortress complex built in the 16-17th centuries in Jeyrahsky district became the finalist of the competitive project “Seven Wonders of Russia”, organized by the newspaper "Izvestia", the TV channel "Russia" and the radio station "Mayak".
What is extraordinary in these towers? Vovnushki, like all the towers of Ingushetia, were built within one year. If the construction of the tower could not be completed within 365 days, it was left unfinished or broken down into stones, and the clan (teip), failing to complete the tower on time, was considered disgraced.

Defensive towers in Vovnushki were duly erected by teip Ozdoy, whose descendants today bear the name Ozdoev’s. The peculiarity of the towers is that they are well located on both sides of the narrow gorge - most likely, the enemy could simply not pass by these watch posts unnoticed.

There was a pendant bridge once pulled between the towers. The height of the towers can be compared to the height of a modern 7-storeyed building, so you can imagine what a man was experiencing while walking along the swinging bridge over an abyss. In addition to the fact that the location of the towers is strategically effective, they are also extraordinarily beautiful; they seem to be a natural extension of the rocks.

Myat-Loam Mountain (mountain Stolovaya, height 3080 meters above sea level) highly appeals to tourists due to the ancient pagan sanctuary located on the top of it. The day of the summer solstice used to be celebrated here. Every year, on that day, a celebration of dancing and folk festivities would take place on Muat Loam.

Tsey-Loam Mountain, translated as «fiery mountain», was revered as the residence of the gods in ancient times. According to legend, the deity of Sela, the patron of thunder, lightning and natural phenomena, lived on its top. 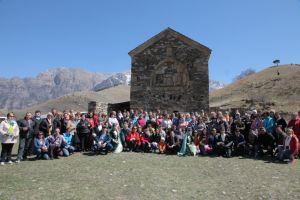 The Targim Basin. Targim is one of the three oldest settlements in the mountain Ingushetia. It is located on the right bank of the Assa River in the Targim Basin in the protected Jeyrah district of the republic. The legend says that the river Assa, small, but turbulent and insidious, with an unusually strong current, takes one human life each year. Unfortunately, official statistics only confirm this terrible legend – people are dying in the waters of Assa every year. Both legends and scientific data indicate that in the early Middle Ages, the Ingush began to settle from Assa gorge in mountainous territory.

The first oldest settlement was Egikal, the second –Hamhi and the third - Targim. And now, centuries later, a magnificent view of the "older brothers" opens up from Targim, and the whole area is called Khai-Khale - "the terrain of the three tower villages".

You can see the key sights of Ingushetia by joining the railway journey "The Great Silk Road".