Stavropol Territory was founded on February 13, 1924. It was initially called the South-East Province. Its current name was received in 1943. The territory has an area of 66, 160 sq. km, its population amounts to 2, 790 thousand people (2013). Its capital is Stavropol with the population of 354, 9 thousand people. The distance between Vladikavkaz and Moscow is 1,450 km. The whole area of the Stavropol Territory fits into the same time zone as Moscow. 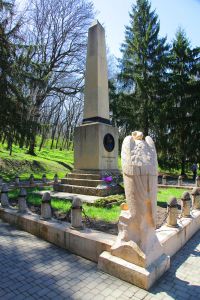 The field of honor of Mikhail Lermontov and Nikolay Martynov on the north-western slope of Mashuk is rather symbolic; in fact one can only guess where the tragedy happened.

In the center of the city cemetery in Pyatigorsk there is a stele indicating the alleged place of the original burial of the poet.

Lermontov's body was buried in the necropolis for 8 months, and then the coffin was transported to the estate of Mikhail Yurievich’s grandmother in the village of Tarkhany of the Penza province. Here the poet was reinterred next to the mother's grave in the family chapel.

Every year on the day of the poet's death, fans of Lermontov's talent gather at the monument on the hillside. 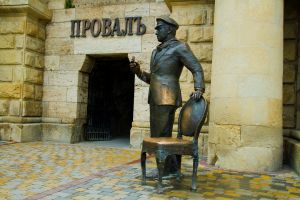 Lake Proval is a karst lake with mineral water located on the southern slope of Mashuk Mountain in Pyatigorsk. Pure blue water gives hydrogen sulphide and special bacteria. The water temperature in the lake is ever changing, ranging from 26 ° to 42 ° C. The tunnel was staved to the lake in 1858; its length is about 58 m. Before that, the people going down to the lake were carried in a basket, which was manually lifted and lowered. 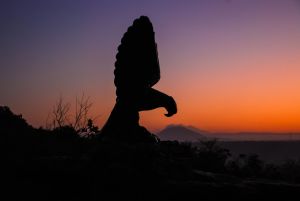 Mashuk Mountain is not merely a natural object, but also a real landmark of the region. There are many healing springs on this mountain. It is known that 5 kinds of mineral waters are formed in the depths of the mountain, such as: carbon dioxide and hydrogen sulfide thermal waters, radon waters, Pyatigorsk and Essentuki types of waters, and also carbonic and nitrogen thermal waters with small mineralization. All these springs are used by the sanatoriums of Pyatigorsk to treat a wide range of chronic diseases.

In 1901 a sculpture of an eagle holding a snake in its claws was erected on Mashuk. The snake symbolizes diseases, while the eagle, being a royal bird symbolizes the strength of the Caucasian mountains by defeating the diseases. There is a cable way leading up to the top of the mountain. There is also an observation deck and a TV tower at the peak of Mashuk, which makes it similar to Montjuic in Barcelona.

"Eagle's Nest", or the summer cottage of the Cossack yesaul Zimin, bears this name in honor of the sculpture of three eagles, nesting comfortably and decorating the facade of the cottage. The summer cottage is one of the few preserved buildings testifying to the popularity of the resort in Essentuki at the beginning of the 20th century. At that time, the well-offs, giving credit to fashion, built summer cottages here, each more extraordinary than other.

Suvorovskie springs. The chemical composition of the thermal water in Suvorovskaya village contributes to the treatment of cardiovascular diseases, locomotor system, respiratory system, skin diseases, central nervous system, gynecological problems and problems of the male reproductive system, as well as peripheral vascular diseases of the limbs.

The water is rich in salts (chloride, iodide and bromide), as well as trace minerals favorably affecting the skin and the body in whole. Suvorovskie baths are ordinary baths, supplying medicinal alkaline water of low mineralization with temperature from +37 to +53 degrees.