Republic of North Ossetia – Alania was formed on July 7, 1924. As a subject of the Russian Federation, it constitutes a part of the Southern Federal District. It has the area of 8,000 square kilometers, and the population of 706,1 thousand people (2013). The republic borders on the Kabardino-Balkarian Republic, Stavropol Territory, the Chechen Republic, with Georgia and partially recognized state of South Ossetia. The capital of North Ossetia-Alania is the city of Vladikavkaz with the population of 312,700 people. The distance between Vladikavkaz and Moscow is 1,509 km. It shares the same time zone with Moscow. Vladikavkaz was founded as a Russian fortress in 1784, at the entrance to Daryal gorge near Ossetian settlement Dzaudjikau. In 1861, it was awarded the status of the city.

The Ossetian Church Nativity of the Blessed Virgin Mary, built in 1860, is the oldest fully extant building erected in Vladikavkaz fortress before it became a city. It is a regular church. 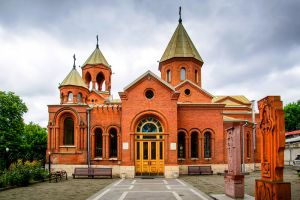 The Armenian Аpostolic Church of Apostle Gregory was built in 1868. It is very beautiful, and organically fits into the landscape, while the waters of the turbulent Terek, having the church built on its right bank, accentuate the elegant architecture of the building. During its restoration, there was an ancient dolomite altar found there. The altar was laid in the first half of the 19th century, when a wooden chapel stood on the former place of the modern church. The temple is active. 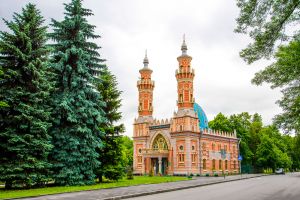 There is a Sunni mosque, or the mosque of Mukhtarov, on the left bank of the Terek River. It was built in 1902- 1908. A major contribution to the construction was made by the Baku oil industrialist - Murtaz-aga-Mukhtarov. Now it is a regular mosque, although, in 1934, it was under threat of destruction. However, the 25th Tatar squadron of the 84th Caucasian Regiment, with lethal force, defended the building. As a result, the authorities preferred to give in and recognized the building as a monument of architecture. The museum of local lore was placed here. And in 1996 the mosque was again transferred to the Muslim community for use. 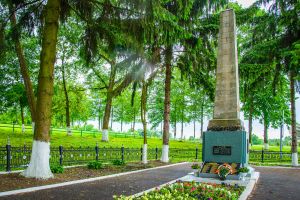 Monument on the mass grave. A granite obelisk is set on a mass grave, in which 200 Soviet officers and soldiers fallen in this area were buried. The height of the obelisk is 10 meters, and the following words are inscribed on the commemorative plaque: "Eternal glory to the heroes who fell in battle with enemies and gave their lives for the freedom and happiness of our people." Among the buried in the mass grave there was Peter Barabashov, a junior sergeant, who closed the embrasure of the enemy's bunker with his body, and was posthumously awarded the title of Hero of the Soviet Union. 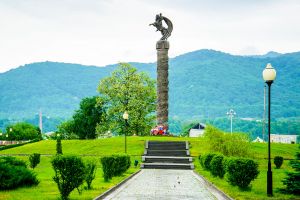 Memorial of Glory is an architectural and sculptural complex in Vladikavkaz. It was opened on May 4, 2005 on the former site of the Krasnogvardeisky Park. The memorial is dedicated to the 60th anniversary of the Soviet people’s Victory over Nazi Germany in the Great Patriotic War. It is a very large-scale, airy memorial, looking particularly cosmic against the background of the mountains. There is a column, crowned by a statue of St. George, in the center of the memorial. On the column shaft, the ribbon contains alto-relievo telling about heroic deeds of the Ossetian people at the war fronts in the defense of their republic.

The North Ossetian Conservation Area is a beautiful mountain reserve. Here you can see everything that can generally be found in the mountains: rocks, caves, dips, glaciers, subalpine meadows and wastelands. If you are lucky, you can see wild oxes, roe deer, and endangered species of large birds of prey. The flight of these winged giants against the backdrop of the mountains is very impressive. Fresh air and the opportunity to drink healthful spring water only reinforce the desire to plunge into this idyllic scene.

Dzivgisskaya fortress near the villages of Dzigiz and Upper Fiagdon is a complex of seven fortifications located at the entrances to natural caves. The fortifications were at an altitude of 10-20 meters and accommodated up to 10 people each. Planking was used for commutation between the individual towers, so that it could be removed whenever necessary, and the tower would become inaccessible.